About Us – Your Expert Oil and Gas Auditor 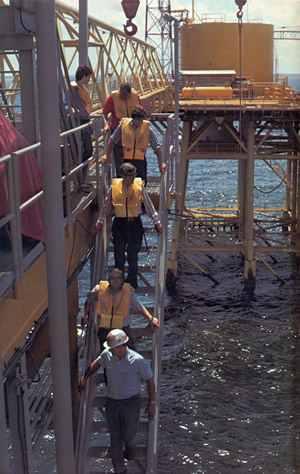 Bob Malone of Malone Petroleum Consulting on an offshore platform in the Gulf of Mexico.

Robert Malone's 30 years of personal experience in the oil and gas industry includes training and working directly in the oil field. He also served as Audit Manager of an oil company and has conducted reviews worldwide. Few, if any, joint venture auditors have achieved this level of oil and gas understanding, which allows him to approach reviews from an operational orientation.

Robert Malone's extensive experience has enabled him to audit wells of considerable size and complexity. The deepest wells thus far have been a total depth of 25,390' and 24,860'. It is rare to find such a high level of insight into drilling operations from a single source. With this expertise comes an assurance that your audit will thoroughly examine areas with the highest probability of containing exceptions that should be reviewed.

Robert Malone is considered a COPAS expert who has authored various COPAS publications. His current, thorough knowledge of COPAS is an important tool in achieving a more successful review. Few, if any, joint venture auditors have achieved this level of oil and gas understanding, which allows us to approach reviews from an operational orientation.

Robert Malone also has received both management training and experience. He ultimately was promoted to supervise numerous departments and was over 275 personnel.

Operations in Alaska are very different and challenging; and therefore, have a definite impact on the resulting accounting. On one large joint venture audit project that was conducted on some Alaska drilling by a major oil and gas company, Bob Malone identified and recovered more money than all the other five experienced auditors in the room who were furnished by other non-operators and working on the same project.